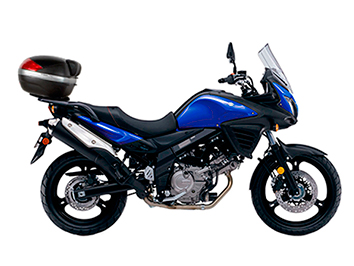 The Suzuki V-Strom 650 ABS was built with the idea of being the “Comfortable Adventure Tourer.” Thanks to across-the-board improvements done on the bike by Suzuki, you could make a case that it’s become more than what it was being described to be. Of the many new elements given to the model of the V-Strom 650 ABS, the most notable is arguably its new 645cc V-Twin engine that features broad torque delivery, signature V-Twin power pulses, and sporty quick-revving high rpm range power surges for full-range riding enjoyment. The V-Strom’s new engine also comes with a high-speed 32-bit ECU that controls Suzuki Dual Throttle Valve (SDTV) system, contributing to enhanced low-to-mid rpm range torque, a linear throttle response and lower emissions for a bike that performs as well as it does. Joining the V-Strom 650’s impressive new powertrain is a six-speed transmission that’s been tailored for active sporty rides with a tighter 1st through 5th gear ratios.